Across eastern North America, usually on the first warm and humid night of the spring, Spotted Salamanders (Amblystoma maculatum) emerge from the ground and migrate, often by the hundreds, to their breeding pools.

There the males swim ardent circles around females in courtship, then deposit spermatophores, which the females take into their bodies to initiate fertilization. A few days later, females lay two to four masses of up to 250 eggs, affixing them to submerged twigs and plants in gelatinous capsules about the size of a tennis ball. It’s a unique spectacle, eagerly anticipated by wildife enthusiasts. But most people don’t know that after the breeding frenzy subsides, another mind-boggling phenomenon starts to unfold.

Scientists have understood for more than 125 years that Spotted Salamanders have a mutualistic relationship with algae. Plainly visible in the jelly of the salamander egg masses, the algae are of a single-celled species, Oophila amblystomatis – which means, aptly, “love of salamander eggs.” The algae raise the oxygen content of the egg capsules and remove waste, thereby facilitating the salamanders’ normal embryonic development. In turn, ammonia waste from embryos creates a nitrogen-rich environment thought to be optimal for the algae’s own metabolism. 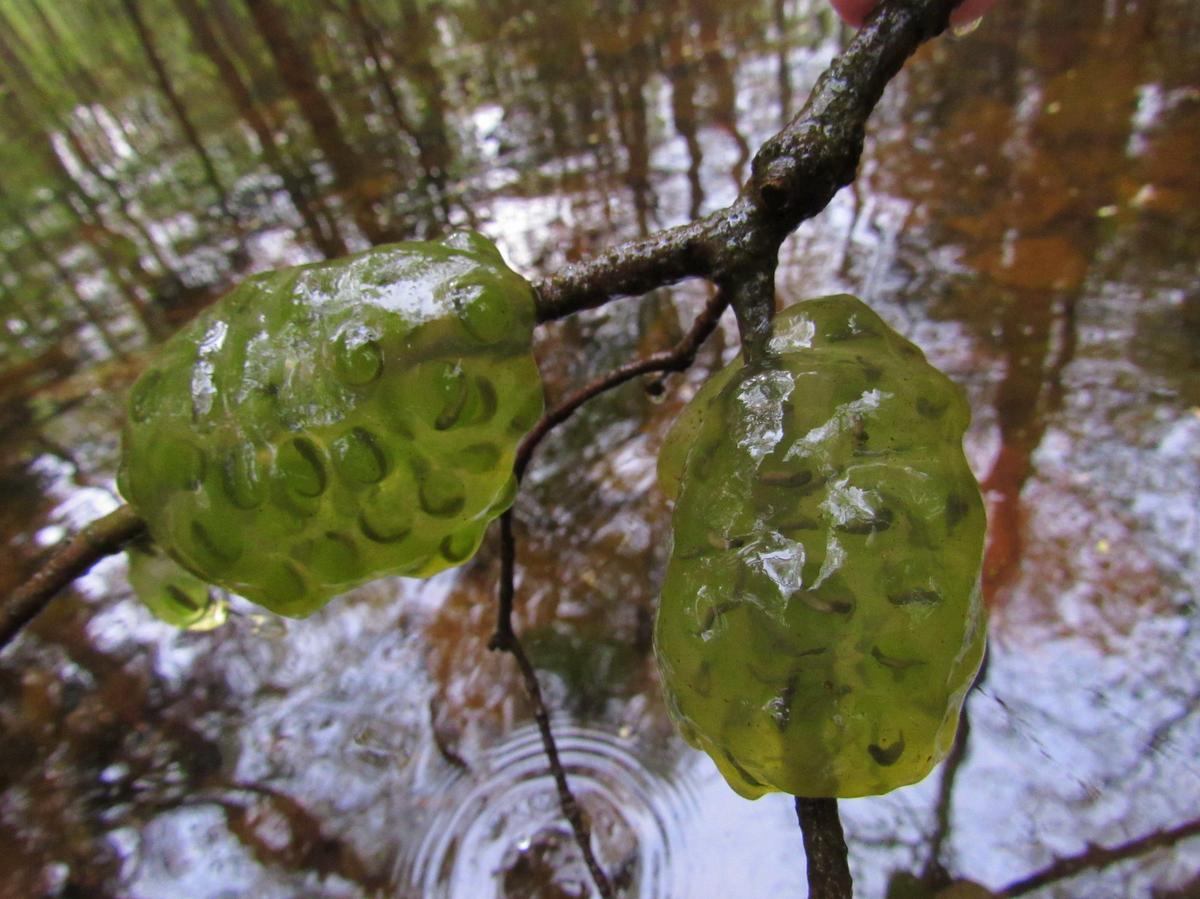 It was long assumed that the algae reside only in the jelly of the egg capsules, or in the surrounding water. But in 2010, a team led by Ryan Kerney discovered that the algae actually also live inside the cells of the salamander embryos and early-stage larvae.

This is the first documented case of algae inhabiting the cells of any vertebrate. Algae had previously been known to inhabit the cells of many single-celled organisms and certain marine invertebrates, including sponges, corals, and sea anemones. The predominant understanding with vertebrates, however, was that their more advanced immune systems destroy any foreign body entering their cells.

The algae become noticeable inside the salamander embryos just as cells begin to organize into specific tissues, particularly the nervous system. Before and after this stage, algae are much less abundant inside the cells. This explains in part why the phenomenon took so long to discover – scientists were not examining the salamander cells at just the right moment in their development. Furthermore, the algae are very difficult to see using traditional light microscopes; only the use of fluorescent and electron microscopes enabled Kerney to detect algae in the salamander cells.

This remarkable discovery has opened much scientific inquiry into related issues – including the fundamental question of how the algae get inside the cells. Kerney and colleagues have discovered O. amblystomatis in the oviducts of adult females, thus raising the intriguing possibility that mothers may pass the algae on to their offspring. It is also clear that many of the algae invade the embryos’ cells from outside. The exact mechanism is unclear, but seems to be related to elevated levels in the host cell of a lipoprotein that triggers endocytosis – the formation of a concavity on the cell membrane that takes in the foreign body and eventually surrounds it. But Kerney’s imaging shows no membrane around the algae inside the salamander cells. So if endocytosis is indeed happening, then there must be some yet-unknown way by which the algae escape the sac that swallows them up.

Then there is the question of what happens inside the salamander cells. Kerney and colleagues have observed that salamander mitochondria (organelles that carry out cell respiration) congregate around the algae, affirming that the embryonic cells probably respire using oxygen and carbohydrates produced by the algae. Furthermore, the most recent research, published in May 2017 by John Burns and colleagues, illuminates why the embryos tolerate the algae – one specific immune response pathway involving a protein family called NF-kappa-b seems to be suppressed.

But while evidence suggests a benefit for the salamander, it seems that the algae might end up worse off once subsumed by the animal cell. Burns describes how algae inside salamander cells show stress responses and inhibited photosynthesis, perhaps because of low light. The algae also suddenly start to engage in fermentation, indicating a possible deficit of sulfur or oxygen. So this intracellular relationship now appears less like sunny mutualistic bliss than a cohabitation gone sour.

But it is still a revolutionary discovery for science, and a revelation of new wonders for us amateur nature-lovers. Who would ever have thought that these quivering capsules, sitting unseen in pools not much more than a puddle, would host such drama – a struggle for sustenance, a breaching of boundaries, an ambiguous alliance, and indeed, a redefinition of life as we thought we knew it?

This article by Mark Chao originally appeared in the Summer 2017 issue of our quarterly print newsletter, The Land Steward.

The FLLT plays a key role in preserving what is special about the Finger Lakes.