We can thank Linnaeus for the name of the luna moth, Actias luna, an apt epithet for this, perhaps the most beautiful of our nocturnal insects.

It seems likely that Linnaeus recalled the Roman moon goddess Luna in 1758 because of the moth’s distinctive hindwing spots – translucent discs with a dark crescent edge, like the moon when it’s nearly full. Perhaps he also realized that the entire moth is a living avatar of the moon – at rest by day, on the move by night, exquisitely pale, subtle yet spectacular. 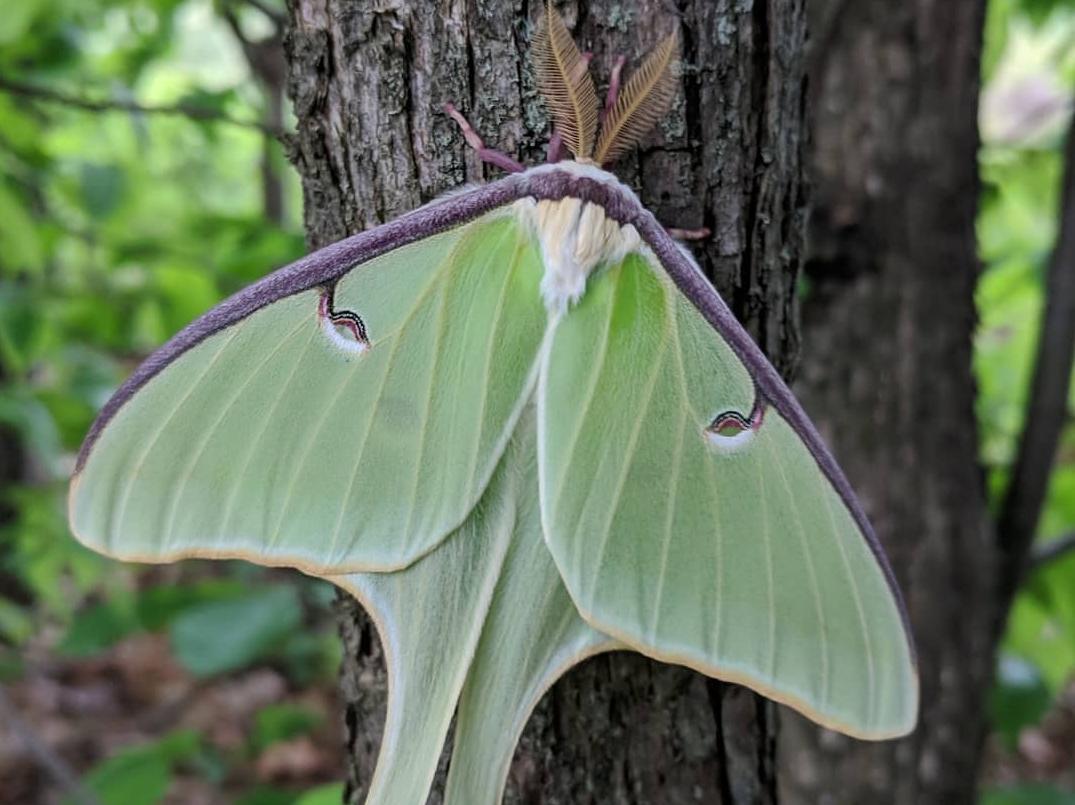 Luna moths are among the largest moth species in North America, with a wingspan of 3 to 4 inches. They are common in deciduous forests from Saskatchewan to Texas, and from Nova Scotia to Florida. Scientists believe that populations of luna moths throughout their range have adapted to prefer particular local hardwood trees as host plants, including birch, hickory, beech, willow, and cherry.

The larvae have five molt stages, or instars, culminating in the formation of a pupa encased in a papery cocoon and wrapped in leaves. After about three weeks, their metamorphosis now complete, adult luna moths cut their way out using serrated spurs near the base of the front edge of their wings. They typically emerge in the morning, leaving time to spread and dry their wings before their first night of flight.

Adult luna moths do not eat at all, and therefore have only vestigial mouthparts and no digestive system. Their sole purpose in life is to reproduce. They have only about a week to do so before they die.

The females emit a sex pheromone, which the males can detect even at a great distance with their broad, feathery antennae. They usually mate after midnight. The females begin laying eggs by the following night, continuing for several nights more. The eggs hatch after another week, and the cycle begins anew.

In the northern parts of their range, including our Finger Lakes region, luna moths typically breed once per year in June. In the south, luna moths breed up to three times a year. For the year’s last generation, the shorter duration of sunlight late in the season causes the pupa to enter diapause, a state of suspended development. Late-forming pupae fall to the ground in autumn with the leaves that encase them, and then spend the winter waiting in the leaf litter on the ground until the longer days of spring signal that it’s time to emerge.

Luna moths, especially large larvae and adults, are high-value targets for insectivores. Therefore, luna moths have evolved remarkable adaptations to foil predators. The caterpillars are light green, matching the color of the leaves they feed on. But when they sense a predator about to strike, the caterpillars abandon attempts at concealment. Instead, they rear up their heads, possibly to confuse the predator, sometimes making a clicking sound with their mandibles, followed by regurgitation of foul-tasting liquid.

Luna moths likewise rely on visual camouflage as adults. Their green wings blend right in among any cluster of broad leaves. Furthermore, the forewings have reddish-brown leading edges that branch to teardrop-shaped spots, looking just like twigs with little emergent buds. Therefore, people rarely find luna moths in their natural habitats, instead encountering them most often near buildings illuminated by artificial lights at night. Most amazingly, adult luna moths have even evolved acoustic camouflage to evade capture by echolocating bats. The key is the long twisting tails on the moths’ hindwings. In 2015, biologists at Boise State University recorded that bats captured 81 percent of luna moths whose tails were removed, but only 35 percent of those whose tails were intact – in the latter case, commonly directing their attacks at the moths’ tails instead of their bodies. Then in 2016, experts in applied physics and neuroscience at the University of Washington and Johns Hopkins University determined that the tails not only shift the location of the echoes, but because of their twists, also scatter the reflected sounds in all directions.

Thus the luna moth embodies not only the full moon in its pale majesty, but also the new moon in its obscurity and unrevealed potential. Hidden among the green leaves, unseen on the forest floor, undetected even by close-range sonar calibrated through eons of evolution, the moth eludes the senses even as it fires the imagination. And just as the ancients saw divinity in the new moon advancing to fullness and waning again, so too can we marvel at the moth’s life history, from egg to caterpillar to pupa to adult and repeating in a never-ending cycle, miraculous in all its phases.

This article by Mark Chao originally appeared in the Summer 2018 issue of our quarterly print newsletter, The Land Steward.

I read to kids on the Story Walks at the nature preserves.