Pull on your hiking boots and follow the trails in this forest, along the rim of Lick Brook gorge, through the layers of time and seasons.

These two preserves, plus the adjacent 27-acre Lick Brook Natural Area owned by Cornell University, provide excellent examples of the area’s geologic history and ecological systems.  During the last ice age, glaciers thousands of feet thick blanketed much of northern North America.  The ice scoured the land, sculpting the beautiful topography of the Finger Lakes Region.  The effects of these glaciers can be seen in the multiple waterfalls that splash down along Lick Brook on its journey to Cayuga Lake, including one that is nearly 140 feet tall.  The preserves protect approximately 3,000 feet bordering Lick Brook at the Sweedler Preserve, and more than 2,000 feet at the Thayer Preserve. 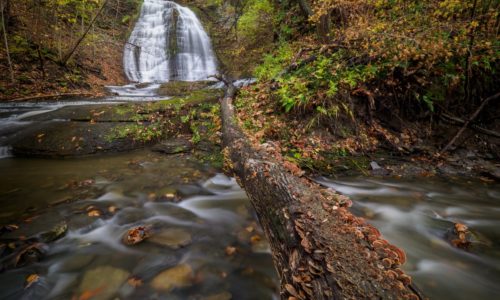 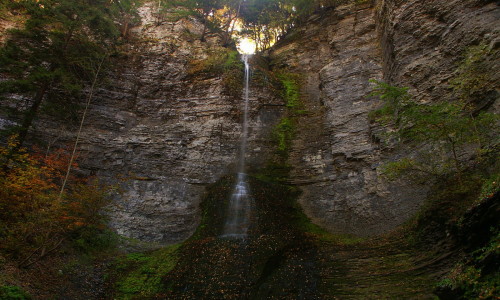 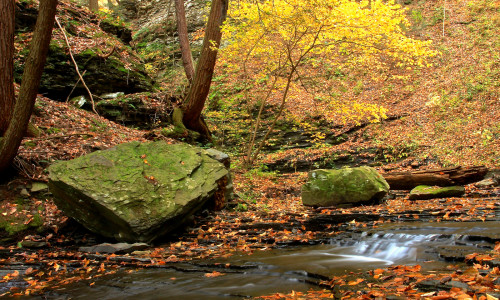 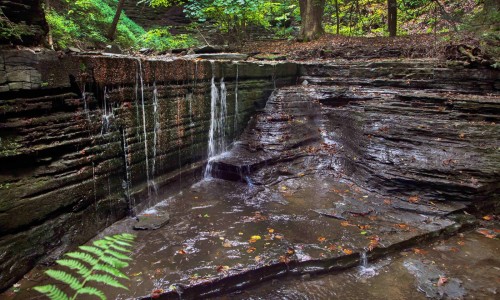 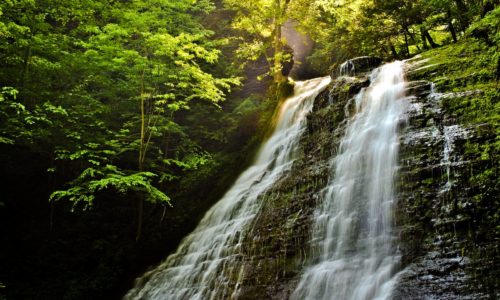 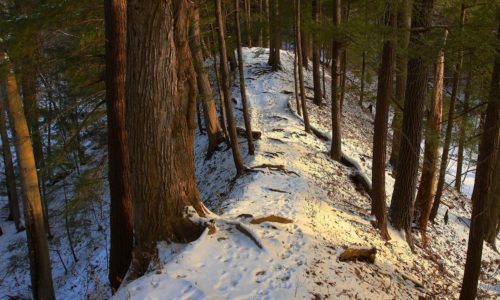 A large portion of this landscape is covered by lofty eastern hemlock and white pine trees, but many varieties of trees and shrubs thrive here.  Different species of oak and maple can be found, as well as the less common cucumber magnolia and mountain maple.  In autumn, Lick Brook becomes part of the colorful tapestry that spreads across the region in red, yellow and orange.  The steep topography of the preserve dictates the downward flow of soil nutrients, which collect in the forest and the floodplain at the base of the slope, contributing to a tremendous springtime wildflower display.  Wild geranium, Dutchman’s breeches, and the aptly named spring beauty can all be found nestled among the majestic sycamore trees that dot the fertile floodplain of the Cayuga Inlet.

The Thayer Preserve has a more gentle topography than the Sweedler Preserve, but the gorge still features steep banks, a few low cliffs, and a bedrock stream bed with small waterfalls.  A mature forest with eastern hemlock, white oak, and sugar maple provides ample shade and habitat for mountain dusky salamanders and the ubiquitous red eft. On a spring day, listen for the flute-like song of the Hermit Thrush and the “zee zee zee zoo zee” of the Black-throated Green Warbler, or tread softly through a fresh fallen snow to find the tracks of Wild Turkey, red fox or deer.

The Lick Brook corridor remains a conservation priority area for the Land Trust.  The perpetual protection of this area allows ample opportunity for hiking, including access to Buttermilk Falls State Park via a spur of the Finger Lakes Trail, and peaceful enjoyment of our natural world, while protecting the water quality of Cayuga Lake.

All dogs must be on a leash and kept in full control by their owners. Please do not allow your dog to chase wildlife or intimidate other visitors.

After the Revolutionary War, the land that now comprises much of these preserves was cleared for timber and agriculture.  Farms in the area were later abandoned, leaving the land to recover and slowly return to forest.  Moss Sweedler purchased the “Lost Gorge” in the 1970s, and understanding its uniqueness, decided to leave it to the Finger Lakes Land Trust in his will.  But in 1989, the Land Trust let the Sweedlers know that Lick Brook was a top priority for protection, recognizing the development pressure in the area and the site’s exceptional beauty, and in 1993 the Land Trust purchased 128 acres from Moss and Kristin Sweedler at a bargain price, creating the Sweedler Preserve at Lick Brook.  Since then the preserve has provided public access to one of the most remarkable waterfalls and gorges in the area.

The land along Lick Brook upstream and across the creek from the Sweedler Preserve was originally protected from development when the Thayer family donated a conservation easement to the Land Trust in 1998.  Ree Thayer was an early and active member of the Land Trust, a dedicated volunteer at the Sweedler Preserve, and had an eye for preservation of the land around her.  In February 2011, the Thayer family furthered their commitment to land conservation and public benefit to the community by donating 20 acres of their land.  This donation, combined with an adjacent seven acre parcel of land along the creek acquired by the Land Trust in 2008, now comprise the William J. and Marjory L. Thayer Preserve.  The Thayer family felt that their donation was a celebration of the many years that Ree and Bill lived in Ithaca and derived pleasure from the natural beauty.

Please be aware that a limited number of permits have been issued for the Town of Ithaca Deer Management Program on the Sweedler Preserve at Lick Brook for the months of February and March 2023. During this time, the marked hiking trail will remain open for hikers. Hunters are permitted to hunt in an isolated area away from the trails. Hikers must stay on the marked trails at all times.

I like the idea that this little oasis will remain essentially as is forever.