Formed by gushing meltwaters at the end of the last ice age, Grimes Glen is typical of many Finger Lakes gorges that still carry runoff from uplands down into the ice-carved valleys below.

Long ago, as the powerful streams cut their way through layer upon layer of shale, limestone and sandstone, they revealed eons of geologic history.

Two stunning 60-foot falls are accessible today by wandering upstream ½ mile or slightly more from the parking area.  Waterfall sightseers should expect to get their feet wet, since the gorge narrows upstream to a point where there is no bank to speak of, forcing hikers into the rocky streambed.  For much of the summer and fall, except after torrential rains, the creekbed is easily navigable, but during spring runoff the flow comes on strong and turbulent.

Still, even in summer Grimes Creek offers children and adults swirling pools to cool off in – the overarching forest canopy keeps things cool, too.  Gorge walls, displaying the history of ages, rise a hundred feet or more overhead.  And then there’s the constant sound of water crashing from falls into the swirling pools below, water burbling around rocks in the streambed, water trickling down the sides of the great walls. 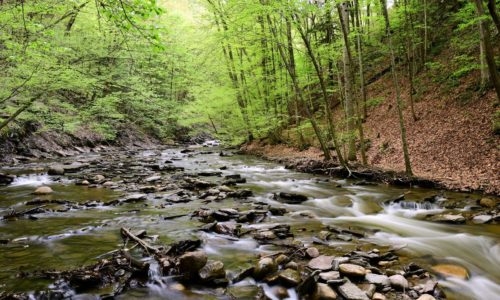 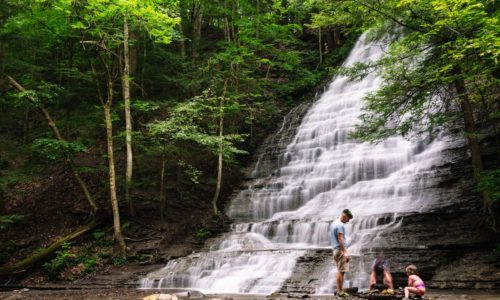 One thing that makes Grimes Glen just a bit unique is the 1882 discovery, by local resident D. Dana Luther, of a tree fossil more than 350 million years old – a Devonian era ancestor of modern club mosses similar to those found throughout the region’s forests today.  The incomplete fossil, which may be seen at the New York State Museum in Albany, suggests a 15-foot tree nearly a foot in diameter near the base, with no trunk branches, yet with a leafy crown.  The ancient tree species is known by its scientific name, Lepidosigillaria––locally it’s just called the Naples Tree.

In 2008, the Land Trust purchased 32 acres within the central portion of this spectacular gorge from Naples native Don Braun.  Grimes Glen had a long history of public access under Braun’s stewardship.  Shortly after purchase, the Land Trust transferred title to Ontario County, who manages the land as a public park in keeping with the history of public use.  The Land Trust holds an easement on the property, and so has a responsibility to look out for the future of this remarkable gorge.

Such strong partnerships between the Land Trust and local governments have proven invaluable to land conservation successes in the Finger Lakes.