Backed by the adventurer Sir Walter Ralegh, they were on a quest to find new sources of the sassafras tree (Sassafras albidum), the only spice endemic to North America. Along with tobacco, it was the primary export of early Jamestown. Meanwhile, French and Spanish explorers were also ransacking forests along the eastern seaboard in order to meet the unquenchable European thirst for sassafras root. Ralegh was imprisoned for treason a few months later, but the trade in sassafras continued unabated, almost driving the tree to extinction. 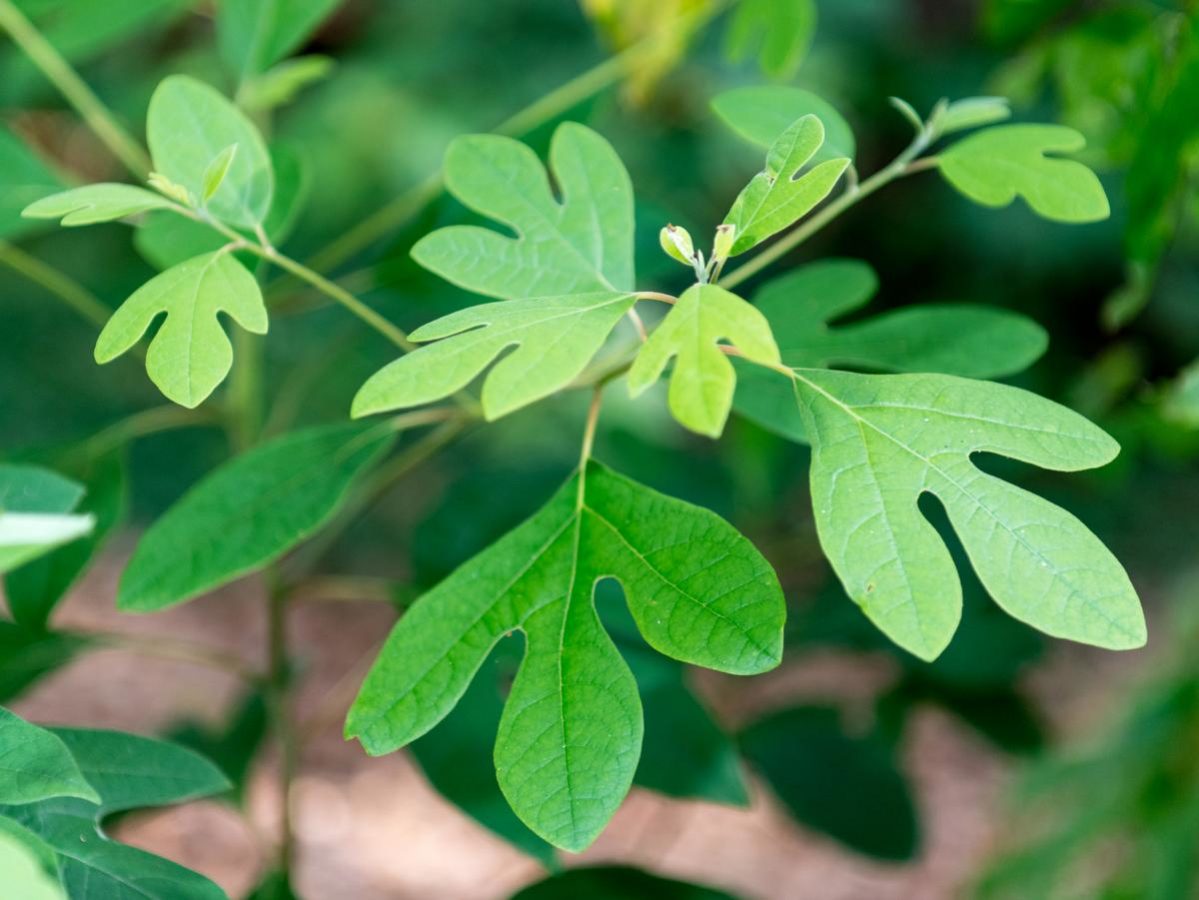 Sassafras grows from New England to northern Florida and as far west as Texas (though the sassafras hunters of 1603 found none in Maine, to their great dismay). Although it can attain great heights in more southern climes, in New York, sassafras is usually a medium-sized tree of sandy soils and disturbed areas. It colonizes abandoned farm fields and fencerows, re-grows vigorously after fires, and spreads by rooting. Its leaves are charmingly off-kilter and, unusually, take one of three forms: some are elliptical, some are mitten-shaped, and some are three-lobed, like tridents. The leaves continue to march to their own drummers as they change colors in autumn; they may turn pale yellow or dark gold, vibrant red or hot pink, maroon or purple, or shades of orange or brown. The fruit are velvety blue-black ellipsoids seated on bright red pedicels, like tiny eggs in egg cups. What attracted the early explorers was not the tree’s beauty, however, but the sweet aroma that earned it the nickname “cinnamon wood.” According to one legend, Christopher Columbus was able to find the New World because he smelled sassafras growing there.

The distinctively flavored leaves and roots of the sassafras have long been used in cooking. The Choctaw used the ground leaves to thicken and spice their stews, a tradition that lives on in the filé powder of Louisiana. The roots have been used to flavor beverages such as sarsaparilla and root beer, chewing gum, and liqueurs, and to scent soaps, perfumes, and dentifrices. However, it was the reputed medicinal properties of a tea made from the roots that created the wild European demand for sassafras. The tea was believed to be a universal panacaea, able to treat everything from syphilis to acne, flatulence to the plague. It could restore virility, fertility, and even youth.

The mellow, warm smell and taste of sassafras – properties which probably helped to convince Europeans of its medicinal properties – come largely from safrole, a volatile compound that is designed to deter insects and is also found in cinnamon, black pepper, cocoa, and nutmeg. Safrole is produced by the tree in order to discourage insect attack, and sassafras has long been used as a natural pesticide. The oil was used by both Native Americans and Europeans as a dewormer and delicer, and its wood has been traditionally used for beds and chicken roosts. But safrole, it turns out, is also a neurotoxin and hepatotoxin – ironically enough, since it was once promoted as a curative for liver ailments. Although the FDA outlawed the use of safrole in 1960 because high doses were found to cause cancer in rats, it has, paradoxically, recently shown some promise as an anti-cancer agent. Sassafras tea is still used in the Appalachians as a tonic and blood purifier.

The North American sassafras, once on the brink of extinction because of overharvesting, has since recovered and is probably more common now than it was before European settlement. However, two related trees, one endemic to South America and one to southeast Asia, are threatened by modern sassafras hunters. The trees are being felled at an alarming rate for their valuable roots because safrole is the chief ingredient in the hallucinogenic drugs MDA (known on the street as “sassafras”) and MDMA (“molly” or “ecstasy”). The demand for these drugs is rising and the trees in many areas of Asia are critically endangered, which only makes them more valuable to drug cartels. A synthetic source of safrole might be the only thing that saves the trees from extinction, but it is difficult to develop a viable industry when ecstasy is illegal in most countries of the world.

This article by Jacqueline Stuhmiller originally appeared in the Fall 2019 issue of our quarterly print newsletter, The Land Steward. I feel passionate about sharing my knowledge about land snails with others.