On the west side of Cayuga Lake, in the town of Romulus, lie these magnificent natural areas that together comprise approximately 1,900 feet of peaceful lakeshore, woods, and gullies.  A parking area on Route 89 connects to a footpath providing easy access to the lake, especially nice for people wanting to launch a canoe or kayak.  A lovely trail through the woods provides an opportunity for an easy loop hike.  Stand along the water’s edge at this wide part of Cayuga Lake, and you are likely to see interesting water birds, boats, and the quaint hamlet of Aurora on the far shore.

Natural shoreline is the hallmark of these two preserves.  The narrow beach is made up of rounded stones, shaped by years of tumbling in the waves.  This cobble beach hosts a variety of shrubs, which are overtopped by tall, intact forest all along the lakeshore, together providing fantastic habitat for a variety of birds.  Along the shore one will find large cottonwoods and may enjoy the presence of spotted sandpipers, Canada geese, brants, common loons, buffleheads, hooded mergansers, mallards, and other seasonally gathering waterfowl.  Visitors may also witness an occasional Bald Eagle roosting in the tall trees along the lake.  Clam and zebra mussel shells are also easy to find–remember to watch out for sharp edges!  A shallow rock shelf extends from the shore, creating an attractive feeding area for migrating waterfowl. 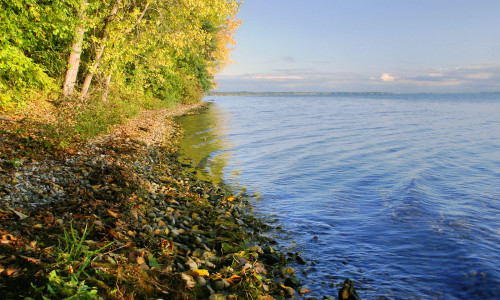 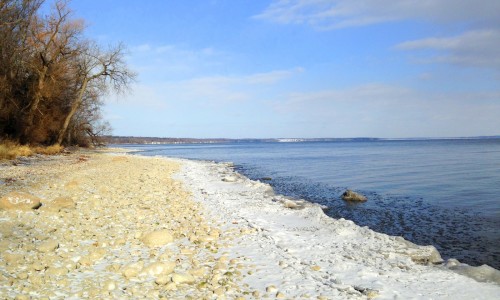 Further back from the lake, on both sides of Rt. 89, there are a diverse array of environments to discover, mature hemlock, beech, maple, and oak forest to young forest now covering past agricultural land to upland meadows and planted stands of spruce and pine.  Hikers along the Blue Trail will marvel at the magnificent tall white oak, estimated to be some 250 years old, and also at the enormous grape vine, huge basswood tree, and cluster of large old sassafras trees nearby.  Throughout the preserves, observers will find a diverse mix of hemlock, oak, basswood, black walnut, shagbark hickory, bitternut hickory, white pine and other trees, as well as flowers such as trillium, violets, wild geranium, jack-in-the-pulpit, and mayapple.  In areas of younger, successional woods, apple, hophornbeam, and ironwood trees serve as reminders of the land’s agricultural history.  Red cedar, white pine, tulip and dogwood appear here and there within younger woods, rising above tangled masses of non-native invasive shrubs that include multi-flora rose, bush honeysuckle, common buckthorn, and common privet.  The portion of the VanRiper Conservation Area north of North Cayuga Lake Road and west of Rt. 89 is cut by a beautiful deep gorge, characteristic of the many short but dramatic Finger Lakes tributary streams – this area also boasting some very large and impressive trees.

It is doubtful that when Louisa Whitlock’s grandfather moved to a farm in Ovid from New York City, he would have imagined that four generations of his family would continue to enjoy the land he purchased.  Both Louisa and her mother were born on the farm.  In the 1950’s and 60’s, the Whitlock family spent summers in Ovid, and in 1966, the family purchased lakefront property.  To help preserve the memories of her childhood and protect the forest she became familiar with, Mrs. Whitlock donated 13 acres to the Finger Lakes Land Trust in 1998, keeping one acre for her family, and since then the Whitlock Nature Preserve has provided public access to a natural lands along the lake.

In February 2011, the 68-acre VanRiper Conservation Area, adjacent to the Whitlock Nature Preserve on the north side, was established when the Land Trust acquired the land at a discounted price from Barry VanRiper and Sharon Moran.  This new addition nearly quadrupled the amount of protected, natural shoreline, and provides a fantastic mix of wildlife habitats, including cobble lakeshore, mature forest, successional forest, small streams, and a rugged gorge.  Volunteers immediately pitched in to help clean up old dumps in the ravines, pull an old boat hoist out of the lake, blaze a new trail, build a kiosk, and make other improvements for the public.

During the full hunting season, from October 1 – December 20, bow hunters will be hunting on the VanRiper Conservation Area in locations that are at least 150 feet from marked hiking trails.  The primary access lane, blue hiking trail, and the shoreline at the lake will remain open for hikers. Hunters are not permitted to hunt within 150 feet of the laneway, trail, and shoreline. Hikers must stay on the laneway and shoreline at all times, and all other areas of the preserve will be closed to public access. Hunters will be allowed to hunt with bow only throughout the regular bow season, as well as through the regular gun season and late bow/muzzle-loader hunting season.

During the full hunting season, from October 1- December 20, the Whitlock Preserve will be closed to the public.

The land on South Hill is special to our family in so many ways.